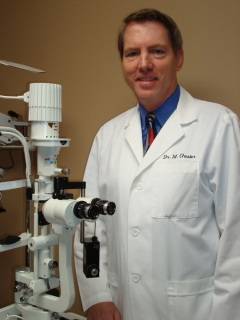 Dr. Mike is a licensed therapeutic optometrist and a fellow of The American Academy of Optometry. He has served as an assistant professor of clinical optometry with The Ohio State University College of Optometry and was a consultant at the Chillicothe Veterans Medical Center. Dr. Mike received his undergraduate degree from Miami University in 1975 and his doctor of optometry degree with honors from the The Ohio State University College of Optometry in 1979. After graduating from Ohio State, Dr. Mike returned to his hometown of Chillicothe to build a private practice from the ground up.  He is a member of both the American Optometric Association and the Ohio Optometric Association. In 1984, he was named the Ohio Optometric Association's Young Optometrist of the Year. Dr. Mike's optometric interests include family vision care and diagnosis of eye diseases including glaucoma, diabetes-related eye conditions, and cataracts.